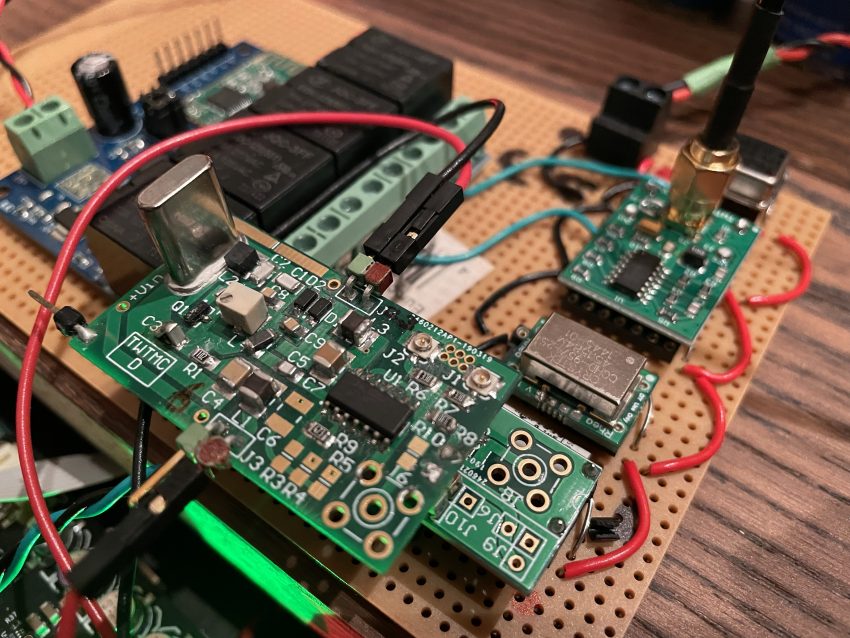 The test goes on…

This time mostly thanks to Stefan Wapstra, who was so kind to send me three 45Mhz Clocks. The First version of Andrea’s DRIXO Driscoll clock PCB, a Crystek CCHD-957-25 and the standard Clock delivered with the FiFoPi Q3. Next to those I had the Accusilicon Clocks 318 and 338 warmed up for comparison with the previous mentioned ones from Stefan. I used the same setup as last time. I had some comments that this was rubbish and I could not draw conclusions because of the flying wires etc. Well, I can assure you, the differences are quit noticeable and the ease of A-B comparison is just to good. Let’s put it this way, when the final setup is defined, no one will connect clocks like this, so assume there is even a bit more to gain. Anyway, this was for relative comparison and not fining the absolute “truth” 😉

Oh, the clocks were all under Power for 5 days or so and never went “off line” during the test

To be absolutely fair, I am comparing a bit apples and pears, as all clocks are 45Mhz except for Andrea v2 which is 5,6Mhz and hence an even lower phase noise as would be possible with a 45Mhz (which is not available, the max are the 22 and 24 MHz, but only as side comment)

In the meantime this is kind of becoming the BIG test. I got very kind offers from people to send in and lend me their clocks… VERY much appreciated. This enables a broader spectrum of clock reviews and comparison and hopefully lead to some guidance of what kind of clock to take for your personal situation. For the record: I used similar / same tracks as last time. All “Audiophile Recordings” with native 44.1 kHz sample frequency

As I wrote earlier, in the Q2 version there are some simple clocks so you can check functionality and get a good idea of the working of the FiFoPi. Even with a simple clock the benefit of the FiFo is clearly audible – but compared to the other clocks the performance is very basic. Now the Q3 clock (sorry I have no clue what this clock is) is clearly a good up tick from the previous version. Sounds gets somewhat more involving. Still not as good as the tent Clock and that was the entry of the clocks which made a difference. So nice it is better, but getting new clocks is still highly recommended !

Interesting experience. My first reaction, was like wow, like someone stomping you in the side to pay more attention. This clock immediately engages you with a great soundstage and lively voices and instruments. Jumping ahead, I believe the clock plays easily in the same league with the Accusilicons and depending on your complete system (DAC, Amplifier, Speakers etc) you might without any doubt prefer this one over the 318/338. Having said so…. it might be the other way round: Like “no, this jumps too much in my face”, I would prefer a notch less intrusive sound. Up to you!

First time I had both clocks in the A-B bench test setup. Still not 100% sure, but “people say” the 338 is “just” a selection of the 318. Well that actually might be the case. They sound very similar in terms of sound stage, natural sound etc. A tad more laid back compared to the Crytek. Is smooth the right wording? But definitively not old fashioned brown English sound or alike LOL 🙂 Great clocks, for a reasonable price and clearly an improvement over standard and also the Tent XO. The 338 is doing everything the 318 does, just a little bit more convincing. If it is worth the more than double price? If you have spend already 4 figures on your DAC, I would say yes. If you keep it simple with a PI, FiFoPi and a standard HAT-DAC, probably not…. my 2 cents !

Upfront, I like to remind you on the earlier apple and pear comments… Never the less, This Andrea Version is much more easy to implement (see pictures, that is all you have / need). Sound wise it takes an interesting step ahead of the 975/318/338 group. This clock is more natural, gives more texture and engages more. Very enjoyable listening… If you could still get these somewhere, it might be a good choice if for whatever reason the V2 version is not on your shopping list

I already described this clock in the earlier tests, but just to put things in perspective with the rest. I had the feeling, as this clock is a bit longer under power now, it even got a little bit more mature. Switching to this clock gives a sudden experience of full engagement, very natural soundstage and a wonderful detail in voices and instruments. like getting more pixles. Not HDR, that is more the Crystek if you will.

Actually I hate wordings like this, but with the 5,6Mhz clock it feels every time if some magic happens. It is clearly recognizable and if all the cons, like the whole construction around the DAC or a totally different price category, are no objection, this is your clock.

Conclusion and next steps

Hard to draw a conclusion to be honest. I’ll take a stab at it. You want best possible? The Andrea 5,6 Clock is really good, but with a possible con of size and not easy drop in, as well the fact it only plays 44.1 family tracks. With clock doublers you can double the amount of boxes, but also increase the range of playable tracks of course ! The doublers increase the phase noise with minimum 6dB per doubling. Meaning this will give better expected results than using a higher frequency crystal….

On the very good clocks (Accusilicon and Crystek) it might be a choice depending on the rest of the audio chain as the tonality of Crystek and Accusilicon differ a little bit. I would say Crystek a bit more analytic and direct (HDR?) and the 318/338 a bit more laid back. BUT the differences are relatively small! For me they all play in the same league…

As next step there will be two more things to be done in one session. Mamal from Berlin send me a 11MHz DIL14 version his friend Jürgen made for him. It is based on the first version Driscoll Clock from Andrea

The second thing being comparing power supplies on the 5,6MHz Andrea clock to see what that will bring (or not)

Later this summer, I will get the whole Andrea SET from Ed to test 🙂