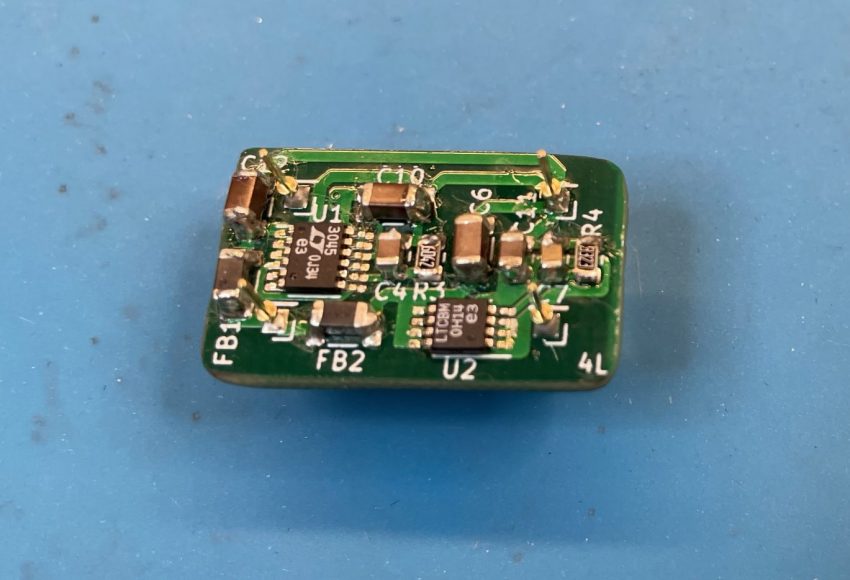 What’s on the menu today? A short meal this time, but hopefully as interesting as short 🙂

Mamal from Berlin wrote me an email after reading the earlier posts and offered to send a DIL14 miniaturized version of Andreas first versions of the Driscoll oscillator. The whole thing is on a DIL14 size. It looks plug and play, but you need 12 Volt input, so you cannot just drop into a FiFoPi. Nevertheless this is very close to plug and play…

It is an 11.289 MHz version. He also has a 5,6 MHz and prefers that one. Which is in line with the feedback on the Andrea oscillators that the lower the frequency the better the impact of the clock on perceived sound quality

I have been listening also to this clock extensively and must say the implementation worked out just fine. I could recognize the same sound print as the V1 Andrea clock Stefan sent me. This Jürgen clock is ahead of the Crystek and Accusilicons. No big surprise, it is still behind the new Driscoll 5,6 MHz I have as a reference now. Still big thumbs up for this miniaturization project !

Power supply for the Andrea Clock

Some claims were made already on the DIY Forum and they were not all aligned. Andrea claims the impact is relatively small to nil. Still Andrea recommends batteries to avoid ground loops (Just in case I guess – not every power supply creates a ground loop of course) Some others claim benefit from good and or low noise supplies.

Time for me to check a few and see for myself what happens… from top to bottom and left to right:

This came in a bit later… I made a battery pack with 5 LiFePo4 batteries with the option to have the Ultracap module in parallel. The A123//UC combination was slowly charged to 16.5 Volt so everything stays nicely in balance and no rush currents are flowing back or forward. See the below listening impressions for this update…

To jump ahead… The impact is indeed very low. If at all, the differences are definitely not the same as between the clocks in the earlier post.

Lets put in in this way, the LM317, DDDAC and LDO regulator all were similar and I could not find any preference.

Switching to the buck converter, OK, now you know not to make life too simple and or cheap. Soundstage gets a tad flatter and pixelized. It is just less engaging. Again small, but hey, why would you do this? Of course not, but it shows how good the Driscoll Board from Andrea is. The influence from the power supply is very low, even when pure crap is used 😉

Connecting the Ultracap Module does something positive. Transients are getting cleaner and more precise. Not much but going back and forward you pick it out and the little voice comes: “yep, that one is a keeper” – By the way, the impression did not change to my ears when the dddac power supply was connected to keep the charge on. So the ultra low impedance of the Ultracap is supposedly doing its work…

Update for the LiFePo4 // UltraCap bank

I listened to both variations, the A123 pack with and without Ultracap bank. And again back to only Ultracap. To be very honest, the differences were relatively small. So small, I would not like to state something like a final ranking here. To avoid misunderstanding, I do prefer the of combination of Ultracap and A123 over the simple LM317 power supply and a little bit over the A123 without the Ultracap. But also here the difference is not large. So the whole thing of battery pack plus yes or no Ultracap might be a personal choice to not do this when there is no space or budget. Even with a “normal” power supply the results of the Andrea Clock are excellent. And the latter ranks undoubtedly Nr. 1 of all clocks I had here.

Having said so… If you have space and budget, it is actually a nice choice. It does give that extra little dot on the “i” so to say… My mantra in listening tests is always: “[=listening….] ….. well, do I like what I hear? yes… so it have to stay”. Hence eventually it do has to stay. Eventually meaning, when I am ready to build an external clock with selectable 44.1 and 48 families and insert up to (selectable or automatic) two doublers in the circuit when the FS of the track requires this. Next “small” upgrade project. Still need to build extra clock and doublers 😉

I also realized a kind of benefit with the setup of battery pack with UC in parallel. First of all, this combination will easily power one clock without new charge for at least a day (2500mA / 70mA ) – This would allow for an automatic charge at night – Secondly, there is no need to take any extra care of charging the UltraCap, as it will always be in balance with A123 pack and slowly charged, still thanks to the A123 always available ….