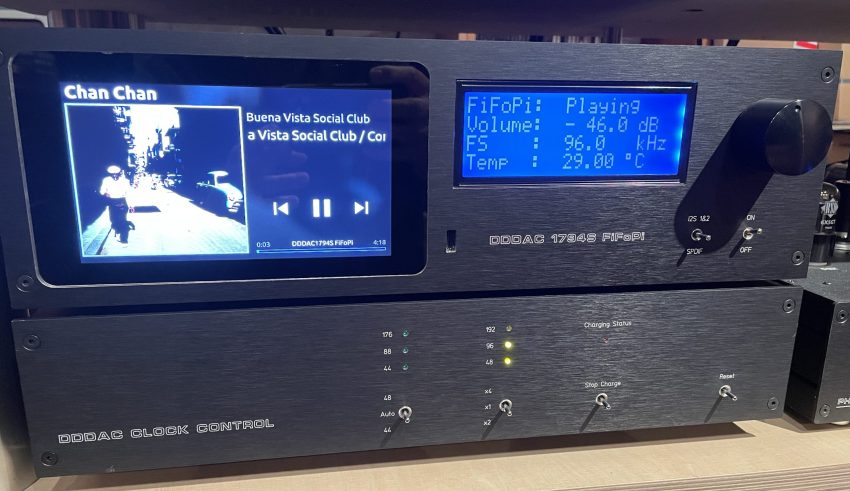 Final clock upgrade for my DDDAC

This is supposed to be the last and “final” blog about clocks. In the previous parts I did a lot of testing and reviews on all kind of oscillators for use in a DAC and for use with Ian Canada FiFoPi and Reclocker (The reclockPI). Ultimately, for me the best sounding clock was The Well Tempered Masterclock (TWTMC) from Andrea Mori. I first built only the, supposedly “best” clock 5,6MHz. This would allow for CD 44.1 redbook tracks only. But would give a good basis and reference. After deciding I would move on with the TWTMC, I also built the 6,144 MHz clock for the FS48 family of tracks. To be able to play my more than 2000 Albums with high resolution (88.2 up to 192kHz…) I also needed the doublers from Andre Mori. It was said, that the Phase Noise would only be degraded by 6dB per doubler, so still having very high quality clocks for all of the tracks I am listening to.

This sounds almost like “but”…. YES there was something nagging in the back of my mind. Which was strengthened by a few emails I got from people who had these clocks as well. The point was: “when playing a lower resolution track, like 44.1 kHz or say 96 kHz, you would NOT need the higher doubled or even quadrupled clock frequency…

My idea was born to make a “clock switch”. So when playing tracks with lower resolution, only the clock frequency needed for that particular sample frequency “FS” would be provide to the DAC. As space was already gone in my DDDAC1794 chassis. The plan was to build an external chassis with all clocks, doublers, power supply and Arduino control. As the common understanding is that the crystals are at their best when at least 3 days under power, this unit must be powered on 24/7

What is this “Switch” supposed to do?

At the left you see the ready built solution. And if you look carefully at the picture compared to the featuring picture, you see that the FS for the track in the display is automatically selected at the chassis below (see the green and yellow LED indicators.

I will go in the details of the building blocks later, but in summary the built is setup like this:

A look at (the inside of) the chassis

Previous tests showed that a A123 battery bank with a ultracapacitor in parallel sounded best. not by far, but enough to go through the trouble of voltage monitoring and charging. As I wanted to keep the charger totally isolated from the battery supply while listening it works like this:

The monitor is just a LM311 comparator which generated a opto isolated digital signal which is read by the Arduino. This flag controls the charging process. See the circuit below for more detail…

The FS signal from the Raspberry PI is available at pin 25 of the GPIO. I pick this up in the DAC chassis and lead it through a coach cable and BNC connect to the Clock Chassis. Obviously we want to keep the dirty RPI ground isolated from the clock ground, so it is connected through an optocoupler,

For Arduino there is library to measure low frequency digital signals (like up to 500kHz). I am using this to read the actual FS and Arduino than generates a series of pules to switch the right clock with the required (none, 1 or 2) doublers to the output connectors. This simple code is all you need

At the right the special switch PCB. Tracks are 50 Ohm specific and the HF relays are Dual Coil Mono Stable. Meaning there is no power on the coils during normal operation, which could possibly interfere with the clock signal

A view how the DAC and Clock are connected. Important to understand. only ONE cable at a time is carrying a clock signal. FS44 or FS48 family. The other cable is mute

Why is that? Well, pretty simple. As I am using the Ian Canada SinePi… Listening tests showed that by only connecting one signal at a time there was a slight positive effect on the sound. not much, but easy to implement on the switch PCB.

Talking about Ian Canada. As shown by measurements from Andrea the BCK signal phase noise was not optimal. Hence Ian designed this really great ReclockPi which goes on top. It uses the clean Master clock to generate a renewed clean set of I2S signals. And this is clearly audible! Thanks Ian, this was another dot on the i ….

No fancy interface this time. Just two rows of different color LEDs showing what FS family and FS are actually playing. Easy to see from the listening position. As it is all Arduino controlled, I just had to make a possibility to make the clock frequency selectable by manual switching as you can see from the switches. To be honest, this was mainly done to be able to make a comparison between, when playing CD tracks for example, with a 44.1 or 176.8 clock signal….

Of course a RED LED for charging status. When the stop charge switch is flipped up, the charging process counter (the 4 hours) is stopped and is continued when set back in the mid position. When flipped down charging is continuously done (for whatever reason you might have….). Arduino makes it all possible, so why not implement functionality like this way my thought 🙂 Just in case the Arduino hangs or you want to be start all processes from scratch, there is a reset button…

Total setup & diagram of my DDDAC

My own personal DDDAC1794 became quite a complex set up I admit. Si at the left you have a total overview of all building blocks. Most blocks are described or are self explanatory. So just for the readers reference so to speak

Great technical stuff, but how does it sound? Thanks to the user interface it was easy to do some comparisons between the clock frequencies, but for starters I want to spend a few words on the Ian Canada ReclokPI and SinePi combination. The before and after situation showed for all an improved sound stage and clearer micro details. This is mostly heard in acoustic instruments with a strong timbre. I also call this sound texture. It is just more defined and gives a more natural analog feeling on it. Cymbals, kick drums, Chellos and voices for example. Without the whole clock project, this was a worthy upgrade by its own. Thanks Ian !

And also thanks to Andrea Mori of course who made these clocks and doublers available. In the previous posts / sessions I already reported that they were coming out on top of my preference list by far (or less far) compared to other clocks, but always had this extra natural sound on it. I was doing these tests always with the 5.6 and 6.1 clocks. So was curious how things perform with the doublers.

The process was easy, let a 44.1 track play and listen to the 44.1, 88.2 and 176.4 tracks. Similar with the FS48 family. To jump ahead, even though the doublers have a reduced impact on phase noise the difference is absolutely audible. Mostly at the 4x FS. And for what it is worth with the 2x FS the impact was there. But less between 44 and 88 as between 88 and 176 so to speak. This somehow correlates with reports from “other” clock owners who went straight for the 22 and 24 MHz TWTMC versions (without doublers) that the higher frequency clocks where not as good (sounding) as the base clocks (5.6 and 6.1)

The perceived difference in my system (the PCM1794 chip in the DDDAC works differently than a PCM63 for example) shows for the base clocks every time again and again, regardless what kind of music was playing the following. When switched from doubled or quadrupled clocks frequencies to the base clock the whole sound stage opens up, it is easier to look through and all instruments and voices get this more defined texture. For me this results in a more natural and analog sound. The moment you stop trying hard to listen for differences it come like a total sound impression. Switching back from 196 to 48 for example or the similar for FS44, generates this more easy natural sound. Compared to this the quadrupled clocks sound a little bit more direct and clean. probably because they lack some of the micro details in the sound stage in comparison.

To put things in perspective…. The doubled and also quadrupled clocks “beats” hand down the standard cheap clocks supplied with the FiFoPi and also are still ahead of the Accusilicon clocks. In comparison with the NewClassD Neutron 3 clocks it is all so close it was hard to tell (for the 4xFS). With the FSx2 I would still prefer TWTMC

Does this mean that for example playing ripped SACDs tracks at 176 kHz are sounding worse than ripped CD tracks at 44 kHz? Uhm… NO! Now comes the funny thing…. True HIGH RES tracks playing at their corresponding clock frequencies still have this “high res” sounding superiority on them. Very smooth and detailed – like looking at HDR10 UHD movies in my 4k Home Cinema. High Res music recordings have something special. A great (still analog sounding) experience.

So I made this crazy experiment: playing a true FS176 (DSD recorded) track and listen. Now use Roon to “re-sample” back to 44.1 and listen again but now with the (automatic) FS44 clock…. Still this re-sampled version gave this very open analog character, but in comparison sounded indeed less “detailed and smooth” – To be honest hard to choose what I would prefer in the long run…

I was a bit surprised, that for the 4x FS clock the sound nature of the DDDAC actually changed more than expected. I am totally speculating right now, but may be it has to do with the fact that the BCK is basically running the Delta Sigma Modulator inside the chip and may be the modulator works better at lower frequencies? Kind of “more better” than what could only be expected by the phase noise. So with R2R chips this whole sound perception could be different! (yes, disclaimer… try for your self and let me know please….) Food for thought and future experiments 😉